SAVE NOW or PAY LATER 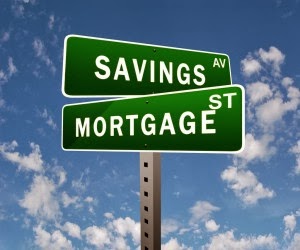 Most people have good intentions about saving for goals. But few know when they should start and how much they should save. Everyone understands, at some level, the need to save for long-term goals. Buying a house, preparing for retirement, or sending a child to college are goals that we know we have to save for. Most of us are also saving in some or other way, but in a goalless and haphazard manner. But how much difference does it make whether we start saving now versus saving later?


Sometimes it might seem that the expenses of today make it too difficult to start saving for tomorrow. It’s easy to think that you will begin to save for goals and responsibilities when you reach a more comfortable income level, but the longer you put it off, the harder it will be to accumulate the amount you need.
The rewards of starting to save early far outweigh the cost of waiting. By contributing even small amounts each month, you may be able to amass a great deal over the long term. One helpful method is to allocate a specific amount or percentage of your salary every month and to pay yourself as though saving for particular goal were a required expense.


Here’s a hypothetical example of the cost of waiting-- 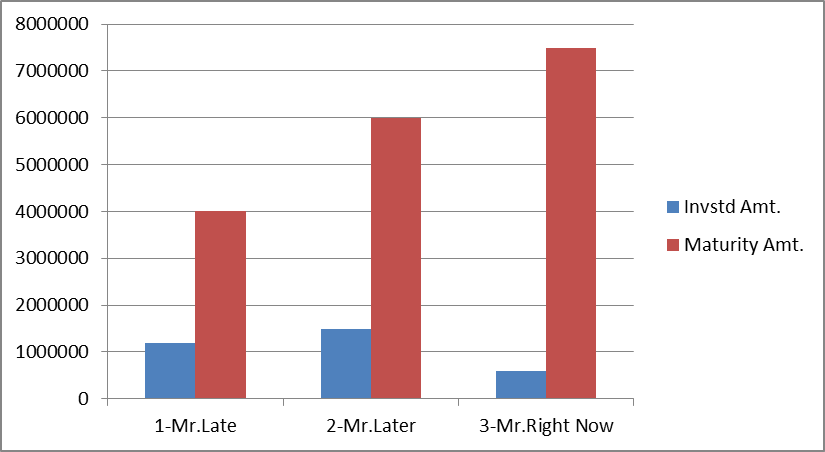 *** DISCLAIMAR-This hypothetical example of mathematical compounding is used for illustrative purposes only and does not represent the performance of any specific investment. Rates of return will vary over time, particularly for long-term investments. Investments offering the potential for higher rates of return involve a higher degree of investment risk. Taxes, inflation, and fees were not considered. Actual results may vary. Total Maturity Amt. assumed returns @ 10% p.a.


This example makes a strong case for an early start so that you can take advantage of the power of compounding. Your contributions have the potential to earn interest, and so does your reinvested interest. This is a good example of letting your money work for you.


If you have trouble saving money on a regular basis, you might try savings strategies that take money directly from your paycheck or salary account.You could also try to increase your contribution level by 1% or more each year as your salary grows-called growing savings with growing salary model. But have to start RIGHT NOW.


Regardless of the method you choose, it’s extremely important to start saving now, rather than later. Even small amounts can help you greatly in the future.


I am still learning and reading a lot, but one of the first books I was required to buy was on “the time value of money”. The effect of earning compounding interest is fairly non-intuitive for most people, so it’s one of the first concepts that’s emphasized when you begin studying financial planning. Few people can do compound interest calculations in their heads, and many don’t even realize that over the years, you earn interest on previously-earned interest.


It's not like the power of compounding is rocket science, yet so few people understand how powerful it can be … assuming you can give it sufficient time to work(as detailed in above example). If you're older when you start saving, compounding won't be able to do as much of the work for you, and you'll need to do more yourself. That means investing a larger portion of (your) paycheck each month.


As educators, we're partly to blame for the information gap on things like the importance of starting early. We need to do a better job getting the word out.


But you can do both.

For years, I was confused about this, as I read books and websites that sent me two different messages:
2.Pleasure now. The second message was usually from other sources on happiness, but sometimes from the same source: enjoy life now, while you can, because it’s short and you never know when your last day will come. Live every day like it’s your last.
Trouble is, I agree with both messages. Live frugally and simply! But also enjoy life!
That’s because I’ve reconciled the two philosophies into one: Live life now and enjoy it to the fullest — without destroying your future. The key to doing that? Find ways to enjoy life completely, utterly, to the fullest … that don’t cost your future very much.
Always fund your life goals account first (I call this as Life Goal account-a different view, a different expense head to be created). Once you've maxed out your Life Goals contribution in a given year, then go wild. Go ahead and buy that 70-inch flat-screen TV or whatever toys you've had your eye on, but do it after you've funded your Life Goals account. In addition, try to cut back on the kinds of major purchases that put you in debt.


It is critical to educate yourself. There are plenty of excellent resources on Life Goals Account investing for those willing to make the effort. Unfortunately, there is also plenty of bad advice out there.


Today's young singles are spending more and saving less than their married counterparts. Are they digging themselves a hole with no bottom or can a shift in the notion of how they spend, not why they spend, keep them in good financial health for the future?
A penny saved is a penny earned, but a penny saved today is a penny earning more. It is important to start saving as soon as possible for events such as retirement due to the impact of compounding. If you start saving now you will need to save considerably less than if you wait a few years.(I suggest take a cutting of my above illustrated example and put it where you see daily, which will remind you of your Life Goals and also concept of Right Now…..