STARTING A NEW SERIES-Dr..Humming Bird Says.......
Dr.Hummingbird will hum it’s words of Financial Wisdom and will instinctively help to think every time it says or asks on a topic…….Here’s something to know about this beautiful small bird….. 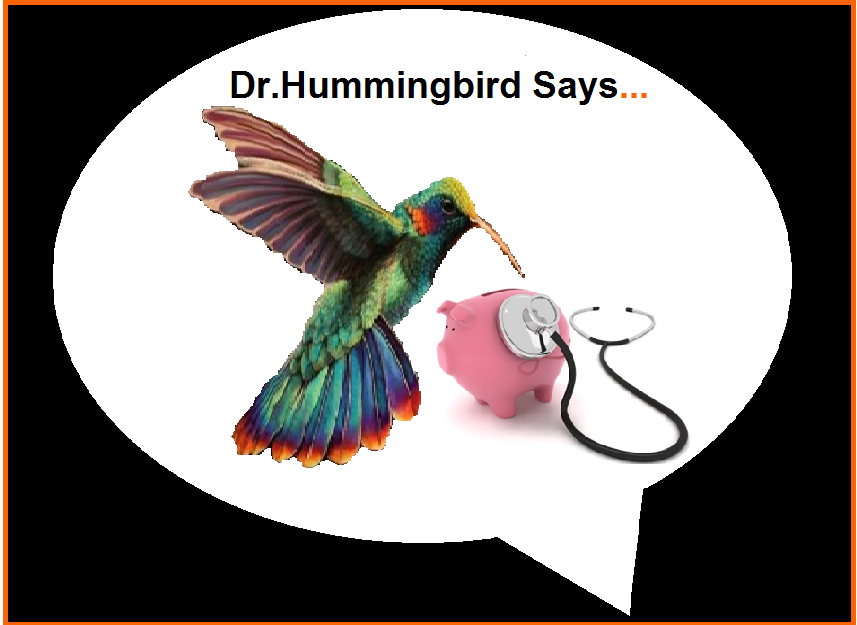 Hummingbirds are New World birds that constitute the family Trochilidae. They are among the smallest of birds, most species measuring in the 7.5–13 cm (3–5 in) range. Indeed, the smallest extant bird species is a hummingbird, the 5-cm bee hummingbird, weighing less than about 2.5g.
They are known as hummingbirds because of the humming sound created by their beating wings which flap at high frequencies audible to humans. They hover in mid-air at rapid wing flapping rates, typically around 50 times per second, but possibly as high as 200 times per second, allowing them also to fly at speeds exceeding 15 m/s (54 km/h; 34 mph), backwards or upside down.
Hummingbirds have the highest metabolism of any homeothermic animal.To conserve energy when food is scarce, they have the ability to go into a hibernation-like state (torpor) where their metabolic rate is slowed to 1/15th of its normal rate.
With the exception of insects, hummingbirds while in flight have the highest metabolism of all animals, a necessity in order to support the rapid beating of their wings during hovering and fast forward flight. Their heart rate can reach as high as 1,260 beats per minute, a rate once measured in a blue-throated hummingbird, with a breathing rate of 250 breaths per minute, even at rest. During flight, oxygen consumption per gram of muscle tissue in a hummingbird is approximately 10 times higher than that seen for elite human athletes.
Hummingbirds consume more than their own weight in nectar each day, and to do so they must visit hundreds of flowers daily. Hummingbirds are continuously hours away from starving to death and are able to store just enough energy to survive overnight.
Hummingbirds are rare among vertebrates in their ability to rapidly make use of ingested sugars to fuel energetically expensive hovering flight, powering up to 100% of their metabolic needs with the sugars they drink (in comparison, human athletes max out at around 30%). One study showed that hummingbirds can use newly ingested sugars to fuel hovering flight within 30–45 minutes of consumption. These data suggest that hummingbirds are able to oxidize sugar in flight muscles at rates high enough to satisfy their extreme metabolic demands. By relying on newly ingested sugars to fuel flight, hummingbirds can reserve their limited fat stores to sustain them overnight fasting or to power migratory flights.
The dynamic range of metabolic rates in hummingbirds requires a corresponding dynamic range in kidney function. The glomerulus is a cluster of capillaries in the nephrons of the kidney that removes certain substances from the blood, like a filtration mechanism. The rate at which blood is processed is called the glomerular filtration rate (GFR). Most often these fluids are reabsorbed by the kidneys. GFR also slows when a bird is undergoing water deprivation. The interruption of GFR is a survival and physiological mechanism unique to hummingbirds.
Studies of hummingbirds' metabolisms are relevant to the question of how a migrating ruby-throated hummingbird can cross 800 km (500 mi) of the Gulf of Mexico on a nonstop flight. This hummingbird, like other birds preparing to migrate, stores fat as a fuel reserve, thereby augmenting its weight by as much as 100% and hence increasing potential flying time over open water.
Hummingbirds drink nectar, a sweet liquid inside certain flowers. Like bees, they are able to assess the amount of sugar in the nectar they eat; they normally reject flower types that produce nectar that is less than 10% sugar and prefer those whose sugar content is higher. Nectar is a mixture of glucose, fructose, and sucrose, and is a poor source of nutrients, so hummingbirds meet their needs for protein, amino acids, vitamins, minerals, etc. by preying on insects and spiders.
Hummingbird bill shapes vary dramatically, as an adaptation for specialized feeding. Some species, such as hermits (Phaethornis spp.) have bills that are long allowing them to probe deep into flowers that have a long corolla. Thornbills have short, sharp bills adapted for feeding from flowers with short corollas and piercing the bases of longer ones. The sicklebills' extremely decurved bills are adapted to extracting nectar from the curved corollas of flowers in the family Gesneriaceae. The bill of the fiery-tailed awlbill has an upturned tip, as in the avocets. The male tooth-billed hummingbird has barracuda-like spikes at the tip of its long, straight bill.
The two halves of a hummingbird's bill have a pronounced overlap, with the lower half (mandible) fitting tightly inside the upper half (maxilla). When hummingbirds feed on nectar, the bill is usually opened only slightly, allowing the tongue to dart out and into the interior of flowers. Hummingbird bill sizes range from about 5 millimeters to as long as 100 millimeters (about 4 inches).
Hummingbirds drink with their tongue by rapidly lapping nectar. Their tongues have tubes which run down their lengths and help the hummingbirds drink the nectar. While it had been believed that capillary action was what drew nectar into these tubes, high-speed photography has revealed that the tubes open down their sides as the tongue goes into the nectar, and then close around the nectar, trapping it so it can be pulled back into the beak. Consequently, tongue flexibility enables accessing, transporting and unloading nectar.
Hummingbirds do not spend all day flying, as the energy cost would be prohibitive; the majority of their activity consists simply of sitting or perching. Hummingbirds eat many small meals and consume approximately half their weight in pure sugar (twice their weight in nectar, if the nectar is 25% sugar) each day. Hummingbirds digest their food rapidly due to their small size and high metabolism; a mean retention time (MRT) of less than an hour has been reported. Hummingbirds spend an average of 10–15% of their time feeding and 75–80% sitting and digesting.
Because they starve so easily, hummingbirds are highly attuned to food sources. Some species, including many found in North America, are territorial and will try to guard food sources (such as a feeder) against other hummingbirds, attempting to ensure a future food supply for itself.


These Special characteristic’s of a Hummingbird, let’s us think a lot on our finances and has a lot of relevance, which we need to imbibe from this small nature creature in our day to day Financial Life.
at October 02, 2014 No comments: